Written by Gloria Faye Brown Bates/aka Granny Gee.  This is dedicated to my friend … Ms Nancy Smith Satterwhite who is recovering from surgery.  Get well, Ms Nancy! 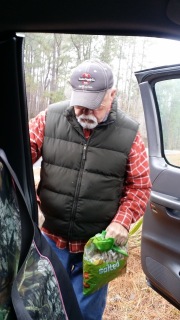 Don’t mess with the homeless, innocent people … animals. There might be a Victoria Fairchild around. By Gloria Faye Brown Bates/aka Granny Gee.

The days went by soon turning into 3 weeks.  Victoria hadn’t heard from her old friend, Tom.  She knew he believed, took her seriously.  Victoria was getting restless … she knew it was just a matter of time before someone else died at Rainbow Mountain Park.

She heard a familiar sound … a big truck coming down the driveway. Chip was home!  Victoria ran outside to greet him.  She missed her husband when he was away for weeks at a time.

Chip parked the big rig … sat for a few minutes, turned the key off.  He was glad to see his beautiful wife. He opened the door … stood on the top step to stretch.  God, he was stiff … he had been driving for 4 hours straight.

Chip came down the aluminum steps … walked toward Victoria.  They were the perfect match … he was as handsome as she was beautiful.  Not only that … they were known to be good, kind-hearted people.  Everyone loved Victoria and Chip.

He wrapped his arms around her, held her close.  There wasn’t anything he loved more than his wife. His dogs came next.

Victoria and Chip had 3 dogs … two of which were rescue dogs.  The Dukester was a sweet pit bull dog they had rescued off a big, heavy-ass chain.  Victoria was working to leash-train him … and to make all 3 dogs be friends.  It seemed impossible but, she knew it would get better.  He was a white pit bull with soft brown spots. Victoria and Chip had a live-in hired man, woman to take care of everything so they could come, go freely.  The man was working with The Dukester, also.

Kissy was their Rottie.  He was also, a very sweet pup.  Kissy was like a big teddy bear.  He danced, wiggle-waggled all the time.  Kissy wasn’t a rescue pup, they’d bought him as a little puppy from someone who bred Rotties.

Camie was their only female pup.  She was the boss.  She was an Aussie Blue Heeler.

For the next week Chip and Victoria stayed close … they went … did everything together.  They were inseparable.  They shopped … went dancing … swimming.  The week flew by in a whirlwind.  Happy days for both.

Victoria stood watching the big rig leave.  Hot tears filled her eyes as it drove away.  Big train horns blew … she saw Chip’s smiling face … blew him a big kiss.  Chip blew her a kiss back.

Sometimes … Victoria went with Chip on the truck.  She used to work at a hospital in the office until one day Chip told her to take off her high heels, pretty dresses and go to truck-driving school. Victoria did just that.

Driving a big truck was a wonderful experience.  Victoria learned to drive in the mountains in the western states.  Mountains where one looked down … houses looked like matchboxes.  Mountains so high she could follow the rainbows with her eyes down into the tiny trees where they ended.  It was breathtaking … exhilarating.

She wouldn’t trade her experience for anything.  Victoria also had a motorcycle endorsement on her CDL license.  She learned to drive a motorcycle as a young girl.  She never mentioned to anyone the things she could do … everyone thought she was … just a girly-girl.  No one knew how tough Victoria could be … she was THE force to be reckoned with.

Victoria thought back to the days she was hunting for a serial killer.  That was the one time she met her match.  He was very cunning, wily … sharp as a shiny butcher knife.  He injured her badly.  She made a mistake thinking he was normal.

The serial killer had been going into the homeless population that began behind Chip’s and Victoria’s building in the city.  When Victoria would go … undercover in her homeless garb … she met with her friends to find out how all was going.

She learned there was a … homeless man who wore expensive cologne … coming in to rape women … murdering when he was finished.  No one knew where the man came from.  They knew when he was there … no one wore cologne in their world.  He could be smelled a mile away.

No one messed with the homeless people.  Victoria loved them and she protected them.  Victoria did things she had to do … including killing to rid the homeless of bad people.  No one knew … they were always happy to hear when a bad person who had tortured them … was gone permanently.

Yes, the serial killer almost ended her life.  She did … end his life.  He’d never rape, murder a homeless woman again.  He used the homeless for his desires … leave … come back when he wanted more.  The homeless were nobody … everyone knew that.  He used their bodies for his own sadistic needs … tossed them aside.

She didn’t want to think about him anymore.  The memories of what he did to her … how her special abilities failed her when she needed them most … made her feel nauseous.

Her mind moved on to the day while walking as an old, homeless woman with a scarf around her head … covering most of her face … this was how she could observe, hear things.  Her dress was worn … full of holes.  Underneath it was a tattered slip with torn lace.  The sleeves reached her wrist … the dress down to her ankles.  It used to be blue … turned into a faded blue-whitish garment.

Victoria could see in her mind the old sneakers she had on.  They didn’t look like much but … those shoes were solid.  They were a good pair of shoes that no one would look at twice … she had made them look old.  It was important she dress to blend in her surroundings.  Not only that … dress … for action.  Sometimes, Victoria had to take care of business … just as she did on this particular day.

She was walking when she heard crying in one of the alley ways.  Victoria felt alarmed … someone … a child? was being harmed.  Victoria became angry with the fires from hell in her … burning brighter and brighter … the closer she got to the crying.

Victoria heard a man’s gruff voice telling someone to … open them damn legs!  She heard him grunting … she heard a muffled scream.  Victoria moved faster toward the dumpster where the sounds were coming from.

As she rounded the dumpster an awful sight met her eyes.  A little blonde-headed girl of about eight years old was fighting for her life as a big, brawly homeless man was trying to rape her.

Her panties had been ripped off … her dress laying nearby.  The bastard was trying to put himself in her.  He was ripping the little girl apart.  Blood was pooling around the child’s hips.  Pure white anger boiled up inside Victoria.

Hey!  Hey you!  Victoria walked up the big man … he never heard her in his lust-driven thrusts. Victoria smacked the hell out of him … he shook his head coming out of his trance.  What the fuck!

Come on big boy … you want to play?  Victoria was going to take care of his ass.  The little girl crawled away while picking up her panties, dress.  She crawled into a corner … no longer crying … her eyes wide open.  She knew the woman was going to die.

The big man got to his feet.  He had a thunderous expression on his face.  Who in the fuck are you?

Victoria … smiled.  The smile enraged the big man … he charged at her.  Victoria was lightening-fast … she moved quickly to the opposite side where the big man had stood.  He shook his head … in disbelief.  What the hell?

He turned to look at her with murder in his eyes.  I’ll kill you … you little bitch!  Victoria … smiled. The big man charged once again … Victoria stood in the very spot where he charged from.  The man pulled a knife out of his pocket … the sun glinted off the big blade … shiny, sharp.

Victoria wasn’t afraid … she smiled.  She reached into her pocket … slowly took a gun out … raised it at him.  Get down on your knees you bastard!  You want to rape a little girl … I’ll show you rape!

The big man wasn’t intimidated by Victoria.  Who in the fuck did this little bitch think she was?  He’d kill her damn ass!

Victoria let him get within 3 feet of her … shot him calmly in his right foot.  The big man squalled out like a woman … became so angry that his eyes were bulging out of his head.  Kill!  Kill! was his only thought.

He lunged toward Victoria to grab her by the throat.  Victoria never moved … she shot him in the other foot.  The big man went down.  Victoria didn’t want to kill him … yet.  He needed to know he was going to die for raping one of her people … homeless people.  No one hurts homeless, innocent people … animals on her watch.

The big man sat up in a daze.  Victoria slapped him several times.  He tried to fight … Victoria let him get a second breath.  She was patient … she stood in front of him with a little smile that didn’t quite reach her eyes.  She wasn’t finished with him yet.

Her attention was distracted … the little girl stood up.  She had put her torn clothes on.  Victoria wanted to hug her.  She nodded for the little girl to run … she didn’t want her to witness what happened next.

The little girl ran like a bat out of hell.  Victoria sensed movement from the big man … he had jumped up to tackle her.  Just as his hand grabbed her …

Note by this Author:

Each character speaks for themselves in their own words … I just write them as I hear them in my mind.  They are themselves … just as I am myself.