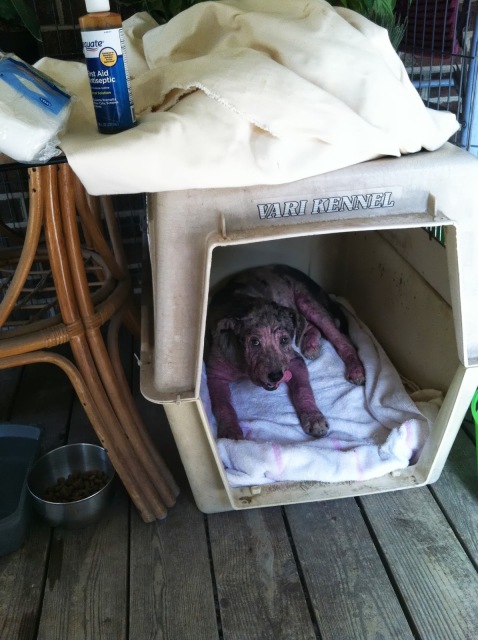 A little puppy lay at death’s door… no one cared

Children played near by, laughing… screaming

As the butterflies flew around the flowers near its head

She lay there thinking of the woman she went to visit

When she could run, play, bark

She could sense the woman was crying for her

Crying for her, thinking she was laying dead somewhere

Puppies can sense things… this puppy sensed she was needed

It sensed this woman was grieving for her…

To go to the woman, let her know she wasn’t dead

She walked the distance to get to the woman’s house

The woman’s Pups came out barking, she came behind them

Back to where it laid once again on the cold, wet ground

No one else wanted her, they let her go without food, water

So, she’d die… one person wanted her, the other wanted her gone

When fleas bit her, made her body sore… they didn’t like her anymore

Now… as the little puppy lay here on the ground, it was too late

Her body had lost its hair, skin red from the sun, she was ugly

The children who played nearby were showing the woman the way

Wondered if the tears were for her… could it be?

When she reached down to get her … her hands touched blood

The woman asked the children if they had a towel, cloth

They couldn’t find anything to wrap around the little puppy

The woman said she’d carry her, get her to her house

The woman wasn’t walking away without her, wasting another minute

She reached down, picked the little puppy up in her arms

The woman knew she was causing the puppy pain, it made her cry

Her weight is so heavy, please help me not to drop her

On the cold, wet ground… I pray I can get her home to care

For her, love her… nurse her back to health

Left her to die alone on the cold, wet ground

With butterflies flying over her… flowers growing near her head

Shame on people who neglect their pets, abuse them

To have their hair gone, their skin in open sores

To feel how it feels to be abandoned, left to die alone

She knew this was a horrible thought… but, if one doesn’t

Know how it feels… they’ll keep right on

Abusing other little puppies, any children they might have

When you knew she was attached to it, loved it

Shame on you for keeping the puppy where it would die

After the woman spent money on medicine for it, put it on

Letting the puppy get in worse condition

Did you keep it penned up somewhere to let it weaken

Because that puppy didn’t get in that condition overnight

Not overnight when she’d was getting better

This puppy must have suffered horribly

Three days… when she could have had her

Those people knew she loved the little puppy

They knew she was trying to make her well, they gave her permission

Winning, saying ‘get rid of it’

Shame on you… this is the thought that constantly goes through

The woman’s mind … though she smiles at you politely

Shame on you for thinking the world is only about you

While you let a little puppy lie on the ground to die, all alone